Back to all posts

**** ANNOUNCEMENT ****
We are very pleased to be able to bring the RELEASE DATE of the forthcoming SKAPONES book " The Skapones- Way Out West; 2019, The Specials & Stuff"  . TUESDAY MARCH 1ST 2022 will be the date. It'll be available from Amazon etc... but if you order DIRECT from our store you will receive the free live CD mini album "Still A-Live". Massive thanks to THE SPECIALS' HORACE PANTER  for writing the foreword.  Book signing day in the North east planned. Info will be posted as and when. Any places interested in a signing event get in touch

From the book press;
"...One shaky mobile phone video taken in a North East public house set the ball rolling.
No one knew where it would go.
In a flash, the images were seen in the USA. The seeds of what was about to happen was sown.
2019 was a great year for these rag, tag, and bobtail ska boys from the Tees Valley.
Their DIY approach had been admired and emulated, and the hard work came to fruition with many great events and spot on their heroes’ UK dates when they played with The Specials on their 40th Anniversary Tour.
America beckoned in a two-week tour across the whole of the nation culminating in fabulous events at the Whisky A Go Go in L.A. and in Brooklyn, New York.
Breakfast in LA, lunch in Chicago and dinner in New York.
It’s a tale of sweat, blood, tears, no sleep, and jam sandwiches.
From East to West – North East ska was the best!..." 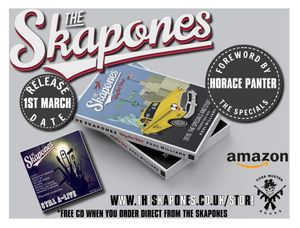